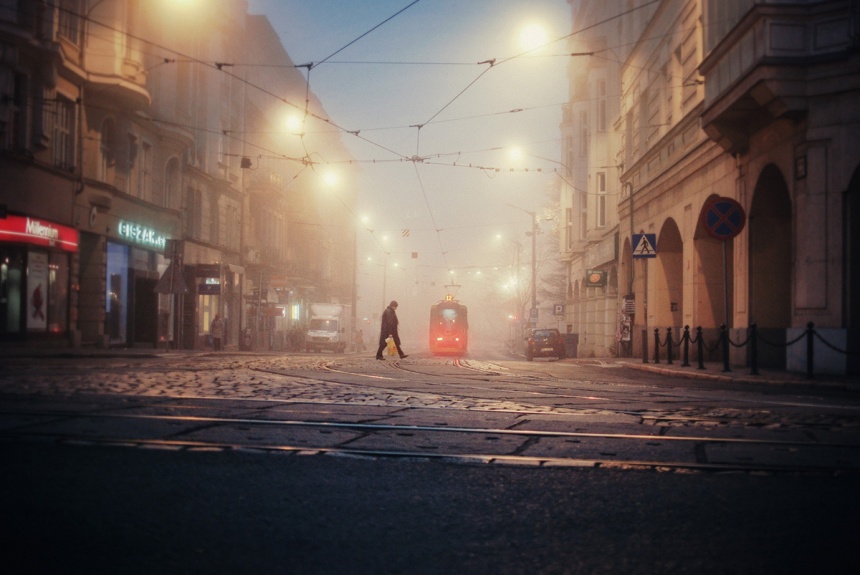 Personal Cinema is a way for me to look back on the images and tell the story behind some of the ones that have moved me and that have some insight to offer into how it came to be. These images really have become my personal cinema, frames from my life living here in Poland, stories that move me. I hope you enjoy this series.

This one titled “Intersections” is not necessarily the most popular, but it is one that really shifted my senses about how and when to shoot my subjects, carefully selectng the way they entered the frame and became my story.

Poznan was still a new experience for me and I was struggling with the newness of it all and the learning curves of culture, language, business and personal identity everyday.  Mornings are something that were not new to me and I had been long getting up before the sun peaked out and most of you even considered opening up your eyes. Most days I was up at 5 am and out the door soon after.  This is an odd time to be awake and roaming the city for many people and I am well aware of that fact. But, I am not most people and usually the excitement of a new day was enough to get me out to find out what I could discover in it.

Nothing is really happening at this hour of the day and barely anyone is around to help me make interesting frames or to help unravel the morning mystery. And those that are, move quick! (In Poland, people walk like they mean it…I have neve seen people walk so fast before I got here and it really made me change how I timed my shots. No second guessing there.Although Sunday, the pace is of a more leisurly stride being the day of rest and all.). But, there is always one or two heading to work or home if the night was longer than expected and once near to the tram stop, there will always be more.

In this image, this si what it looks like at that time so early in the morning. Empty, quiet and very atmospheric with the single person heading to where they need to be and of course, the trams beginning their morning route carrying the few passengers to where they need to be. Did I mention quiet? I would at times hear a person walking before I would see them. Especially women with their heels. There is a specific sound it makes as the walk along the cobblestones or an empty street adding to the cnematic feel for me.

In this last stage of autumn, the night rolls on well into the morning and I was still not very accustomed to the late hour of sunrise. I found that I really enjoyed this time and for a while, shooting in the near dark was soemthign that would really grow on me. The coffee shop I had opened at 7:30 am giving me plenty of time to make my rounds, gather the things I needed, get it ready to open and most importantly, allow me time to shoot. Which I took advantage of. Completely.

Personally, I love this image. It has the elements that really trigger my cinematic midset. The colors draw me in and the shadows and composition keep my eyes happy. There is a timeless aspect to it that appeals to me as if the image could have been taken many years earlier. I found this to be a huge advantage and soemthign that again, appealed to the cinematic aspect of the locations.

The lone figure became something of a symbol for me over the yeats as I made my morning routine of shooting whiel heading to work. That lone figure sbecameasme my protagonist and in many ways started to represent how I saw myself walking in this new life. I wanted to tell the story of what I see in a way that peope could relate to, but n a way that I related to as well. Whether it was a man or a woman didnt matterto me because it was the idea of that person seeing the very thing I was seeing through my camera…except thay starred in the picture and I directed it.

I realized this some years later when I was still going through the process of discovering myself and some of the meaing to what was drawing my eye. These images are how I showed my friends and family back home my life without it becoming a “selfie”. Besides my little Nokia at that time couldn’t take any form of a picture and was not smart at all. It would be years later when I actually took a “selfie” from my phone and started any real effort with mobile photography. For which I am thankful for because in many ways it allowed me to find a more creative way to showcase this wonder.

I hope that you enjoy the read and my little “personal cinema” bringing further life wiht a little behind the image.

And I am also pleased to announce that you can get your very own copy of this image from my newly opened store in partnership with Get Inspired Magazine here. I will be offering more soon and including some of my favorite and compelling images, so check back often.