I think about this image quite a lot these days. You may have seen it somewhere before, strewn about on the internet or perhaps you have shared it yourself or are seeing it for the first time today. However it happens, thank you for your part.

I consider this frame now because it was the image that really changed so much for me and my photographic vision. This image and the morning that it was taken which I aptly titled “This Morning” at the time, almost as a forethought as to what was to come later, represent so much change that had been occurring recently, the arrival of autumn, a new home, new work life and a new city to explore. At this point in my life and  when it was taken (October 15th, 2012) I had been in Poland for barely over a year and had been trying to find my path with photography while also feeling like I was failing to some degree showing this new, exciting life of mine in Poland. We (when I say we, I am saying myself and Agnieszka, who is the reason that I am here) had been living for that year in the lovely subub city of Swarzedz, not far form Poznan, but a little removed. It was there that I began my journey but it was on this morning I feel that it really took off  and accelerated in many ways.

In the weeks that led up to this image we had moved from Swarzedz into the neighborhood Jezyce while at the same time opened a small coffee shop, Bigfoot Coffee Shop, in the center of town. A very busy time of severe learning curves and new agendas. But,  On THIS morning I was on my way to open the shop and get the coffee moving, toting the days goods along with my trusty Nikon D80 appreciating the chill in the air and looking for anything interesting to capture. Believe it or not, I was still a little shy about the tram system ticketing and would often at this point walk to work, enjoying the scenery along the way, wandering the streets and getting a feel for the route. I loved this walk and miss it from time to time now, but I also feel that having covered this ground for so many years, I am pretty ok with what I caught along the way. Very ok, in fact.

I had experienced one Autumn season in Poland to draw from, but I as I started down Most Teatralny and the slope into the city, this amazing light began to take shape on a  brisk, autumn morning and had I woke up just a few minutes later I would have missed it entirely. This was the perfect mix of intense colors, dark shadows and hints of “magic” for me and in an instant I had dropped my stuff and started to position my shoot. I was already infatuated with the older models of trams that ran throuhg the city and in a moment of pure serrendipity, this one rolled by at the perfect moment giving me the depth and subject that made it a little more interesting for me. There is a person crossing in it, and you may or may not see them, but they are just behind the tram. Here as well, I was alittle bit shy from including people in my frame. I didnt take so may shot of this scene and the color faded rather quickly leaving me to continue to work and get that cup of coffee going.

I didnt get the chance to review the images until the weekend with my new schedule occupying most of it and then figuring out my day-to-day taking up the rest. When I did get a look, I was really floored and knew that the moment was something magical, the cinematic aspect appealing to me instantly and filling me with a little excitement. “My own frame from my very own personal cinema” is how I thought of it then and this thought would later shape my vision and treatment of how I approach and further developed my style. You should also know that I almost never posted this image because I hated the grafitti on it and for a few hours I was undecided while it hung in the balance. As you can see, I got over it.

What I wasnt prepared for was the amount of attention this image would draw for the days, weeks and years to come and continue to return back to me from all over world. Somehow, this image especially appealed to the people of Poznan in a very special way, one that I never suspected and it called to attention the magic of nostalgia and pushed my work into the limelight creating a buzz around it. This image followed me and became my signature piece for years…perhaps even still it works that way. And for a time, I stopped sharing it and let it be, but it never really laid low.

The point is, that on this morning I discovered the soul of what, how and why I shoot that followed me into the heart of Poznan and Poalnd for years to come. Shaping my vision and allowing me to further explore the feel of what I see and how it affects me, giving me the “edge” that I had been looking for. This image did that. This morning did that. This little piece of my own personal cinema that managed to captivate the heart of a city. I also discovered the magic of moments and how they are fleeting, that the time may never repeat and to take action when it does. I am grateful for all of it and so, once again I share it with you while giving you a glimpse into how it came to be.

You can still catch this colorful moment, every October, around the mid month mark and watch the sunrise over the city as the trams roll by. 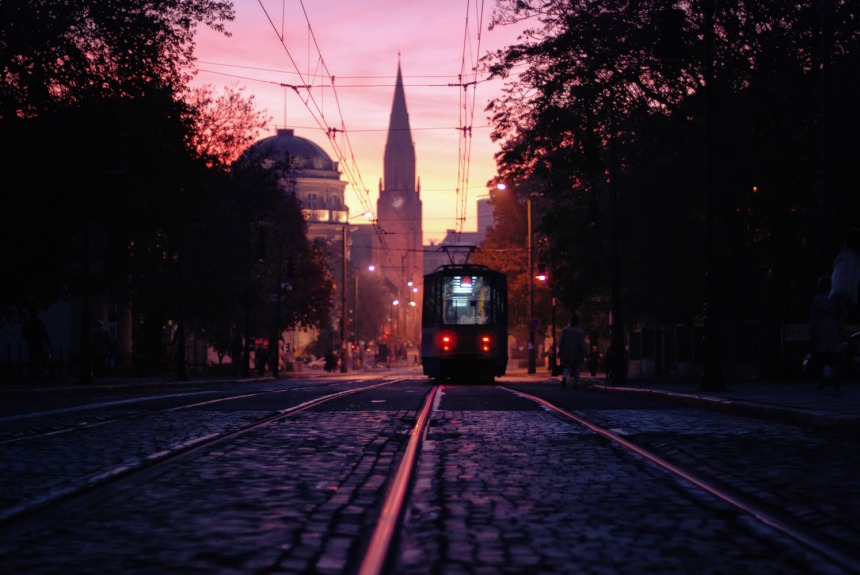 2 replies to Personal Cinema; This Morning